I started the week working on issue #4 and printing issue #3 (dropping them off around town today.) Issue #4 was originally intended to be a Highbrow story. However, I had some problems, and the story was not coming out quite right. I did complete 2 pages pencilled/lettered, but they just did not feel right. Then I noticed a setting on my scanner to invert the colors in a scan and came up with an idea to do a Reverse Chicken story. Similar to a Bizarro/Reverse Flash type character. I very excited about this new idea,

As Friday showed up it was time to change over to the computer and try to learn how to prep the comics on the computer. I began to scan in my original pages, and realized they might copy nicely on the cheap copy machines at Kinko's, but they look horrible scanned into the computer. It looked like I might have to redo all these pages on the computer. At this point I was not sure what to do. So, I began to work on the cover for the San Diego Comic-Con Edition, which will reprint the first 3 issues and will be handed out at the Comic-Con. (I do not have a table at the con, I will just be walking around and leaving copies places for people to pick them up.)

During the creation of this cover I had a need to learn how to do several things in Photoshop. First the scans of the original art work were having problems with the cross hatching on the officers uniforms. I discover this great tutorial on creating screen tones at Jinxworld. The other thing that I needed to learn was how to create word balloons. I found a terrific tutorial at Makeshift Miracle. 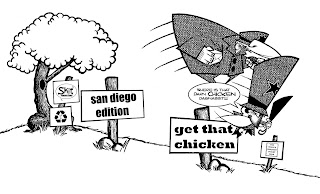 After a day of working on it, I managed to complete a fairly nice wrap around cover. I'm not super excited about the cross hatching of the officer uniforms still, but I have been working on making a better version of this pattern and will hopefully have one I like, soon.


That 's all for this week.