I finished up issue #9 of Get That Chicken this week. Unfortunately I have not had time to get around town to drop it off. At this time there are copies at Atomic Comics Metro and Drawn to Comics. I hope to get some copies to the other regular drop offs by next weekend. This week I also created some new displays to put the books in. Both Atomic Comics and Drawn to Comics now have them on their counters. (Pictures below issues #8 & 9 in the new displays.) 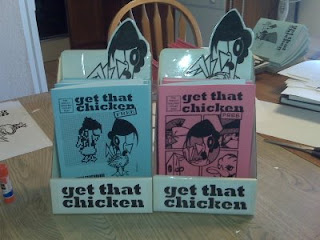 I signed up on Facebook a little over a week ago. I plan to use Facebook as a way to keep you up to date on the day to day happenings (if there are any), as well as any in store, conventions and other appearance, which I might do in the near future. Click here if you are interesting in added me as a friend on Facebook.

Other than that I have just been busy finishing up this weeks strip.