The Week In Review

Wow so much to talk about so little time. At this moment, I'm late ,so I will be back later to update the text part of the blog.

Wow what a week. First off my day job (teaching) started up again this week. This has taken up way to much of my time and energy.

Wednesday night Eric Mengel and I went to a Tiny Army meeting. The meeting was interrupted twice by the building fire alarm. Everyone was great at making 2 new members feel welcome. Looking forward to future meetings and getting involved in the local community.

Friday night Eric, Brandon and myself (3/5 of the Meanwhile Collective) set up in front of Conspire (thanx Star & Lisa) to hand out copies of Meanwhile #1. We handed out over 100 copies of the book. A special thanks to everyone who picked up a copy and read it.

After we were done handing books out. I gave Eric a tour of the First Friday area. We stopped at many galleries and watched couple freak shows. My big find of the night was an artist named, Adrian Dominic who created this awesome little fish paintings. I wish I had a couple of grand to buy them all up. Adrian Dominic's work is appear at the Pravus Gallery until the end of August. If you get a chance check it out. Also you must read the titles of each of the fish paintings to fully understand them.

Finally Saturday night I received a tweet from Red Hot Robot about a Munny show at Just Blazed. Here are some pictures to wet your appetite. 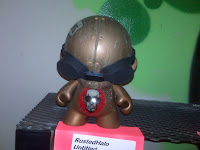 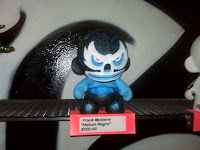 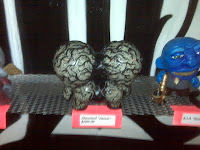 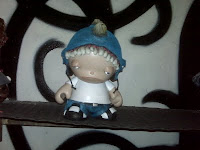 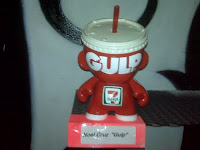 Not sure how long the show is running for, you might want to call before you head out.
Now for some comic news. I have received a few emails asking when I will be printing Get That Chicken #10. This issue was put on the back burner when Eric and I started the Meanwhile Collective. I hope to have a chance to print it up either late September or early October. However, next up is Meanwhile #2 due out the first weekend of September.
That's all for this week.
take care,
-denny!
Posted by dennmann at 9:59 AM