Wow the Phoenix Comicon was bigger than ever this year.

I would like to take some time this week to recap some of the events and my finds of the weekend. Starting with two great things that happened to me.

The 1st was when I met a fan of my work, who has been reading Get That Chicken since my mini-comic days. This was a priceless moment for me and made the whole weekend worth it.

The 2nd was the Webcomics Academy panel with Daniel M. Davis (creator of Monster Commute). Daniel has been a mentor to me over the last 10 months and I was thrilled that he shared this panel with me. Below you will find the handout notes, we provided to the crowd in attendance. It was basically a chat back and forth where we elaborated on the topics listed in the notes. A great time was had by all. 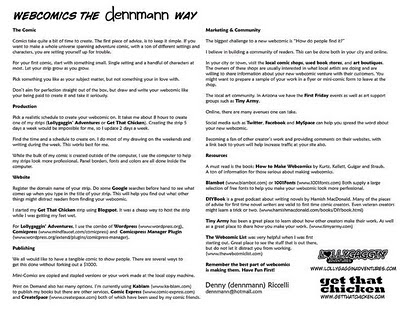 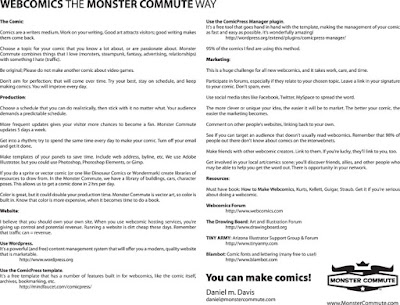 Also this weekend I finally met Thomas Hall, the other half of the creative team behind Robot 13 and Blacklist Studios (I had met Daniel Bradford previously). Both of these guys are gentlemen and create some awesome comics. If you haven't had the chance to read an issue of Robot 13, I suggest that you pick it up (and their next project King looks to be even better).

I will be back daily with other new finds to share.

PS, Don't forget the Get That Chicken trade is available for online order.
Posted by dennmann at 10:17 PM