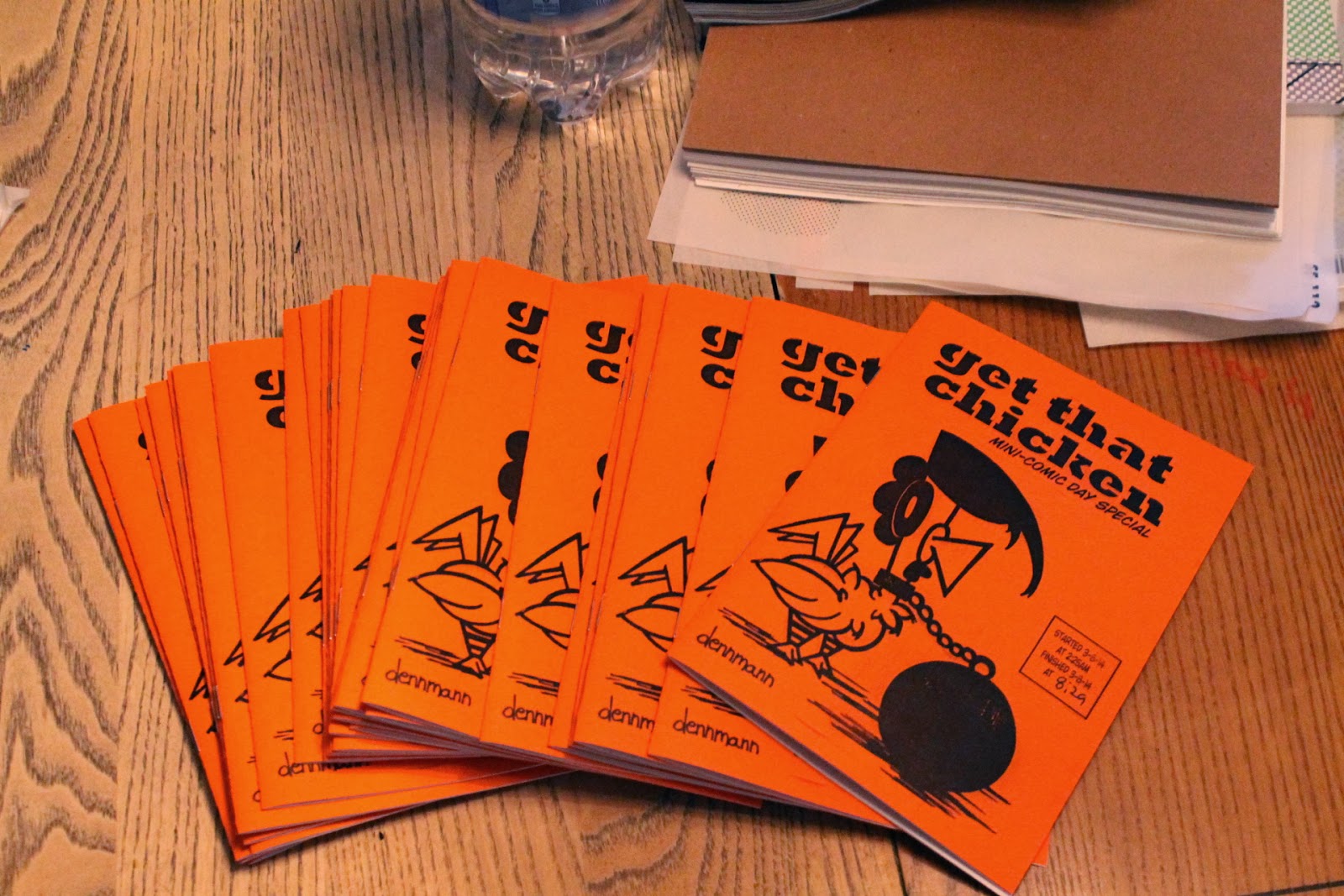 I cannot express the feelings I had about yesterday. Mini-Comic Day might be my new favorite challenge.

I started the day waking up at 2am and doing layouts and writing my story for the challenge. I also spent some time digitally lettering, then it was off to pick up my comic Partner in crime, Eric Mengel. Eric and I had a quick breakfast at Denny's (cue up the Denny at Denny's jokes) before heading over to Jesse James Comics to start drawing.

Drawing began at about 8am. and went steady until I had a minor meltdown at 10am. So I took a short break and went to Kinko's to print out the word balloons that I had made earlier. Once I put those balloons on the pages, the meltdown disappeared and it was smooth sailing until 5pm, when I completed the art for the mini comic, 8 pages and 1 cover.

At about 9am Damon Begay joined us a Jesse's. If you are not familiar with his work and enjoy independent mini-comics this guy is AWESOME!

From Jesse's Eric, Damon and myself headed to Office Max to make mini-comic magic. This is where we hit our first snag. We were using different copy machines than we usually use, so it took us each a little time to figure out how the machines work. (Mini-Comic Pro Tip - always learn how to use the machines before you start making massive copies.) The lady at Office Max was super nice to us, even though we had paper everywhere and we bogating the machines.

With copies in hand, we headed to Lawn Gnome a couple hours late. When we arrived we were shocked to find friends and supports patiently waiting for us. Seriously, we were in shock that people were there waiting for us and felt really bad about being over 2 hours late. So thank you for your patients and support, you guys rock.

Also thanx to Larry Sanchez for some awesome promoting before the event!!

And a bigger thanx to all our friends and supports, you guys (and gals) ROCK!!!!!

So the challenge it to draw & write a comic, print it, then debut it later that same evening? Wow, that sounds like a heck of a challenge!

Glad you accomplished your goal, despite all the snafus. And it sounds like being greeted by a bunch of eager fans at the end of the day really made it worthwhile.

By the way, Denny, I really enjoyed the Jenny Spookawski and Giant Size Mini comix I got from you. Thanks for producing some really fun comic books!