The goal of this post is to bring my own expectation into focus and help me better understand what I should hope for when selling my comics at a store appearance.

About a month ago, I had an interesting discussion with Ray of A Shop Called Quest.  The chat happened towards the end of the IE Zinefest (ZineQuest). I had had a pretty good day sales wise and was happy with the events turn out, but did not get the feeling that this was true for other vendors at the event. There was plenty of foot traffic, but I had spent a lot more time talking to people than selling to people. 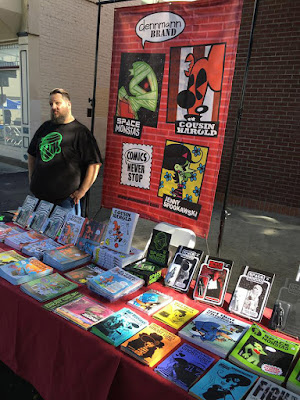 Ray had stopped by (as he does with every vendor) to check how things were going and to see if I needed anything. Not sure how the talk got there but we started to discuss the amount of product I had on my table and how this might have played a big part in my success that day. Many of the other vendors had only a few zines on their tables and maybe a box of original drawings. It seems that the amount of choices had led to more sales for me that day. Which is kind of funny because Eric Mengel and I always feel that the amount of product we have on our tables might actually hurt us. But at least for this event it was a huge help.

The conversation then turned to questions about how many items does a person really expect to sell in a day. What would be an accurate number to expect? At that point I asked Ray if he knew how many copies of Batman he sold that day. Batman is the industry standard an usually used to measure the success of other titles. He did not know the number off the top of his head, but did not imagine it was very high. I headed back to Arizona with the following questions in my head, "How many copies of Batman does a comic shop sell an any given Saturday?"  and in turn "How many copies should I expect to sell of my Cousin Harold comic on any given Saturday?" 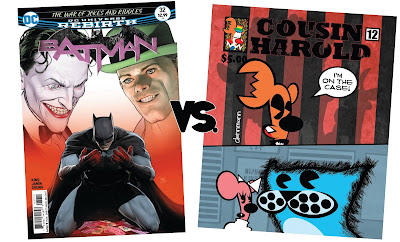 I asked a few stores about their sales of Batman on any given Saturday and was given numbers between 9 and 11 for the current issue and a mid teens number for back issue sales. What does this mean? Well on any given Saturday a store sells about 10 copies of Batman (which is a comic with a major corporation behind it, that includes a bunch of movies and several different television series dating back over 50 years). I believe it is safe to say that the majority of people walking into a comic shop on any given Saturday know who Batman is.

What does this mean to me? Selling 10 or more copies of my comics at a store appearance should be considered a success. My goal from now on at any store appearance is to Beat Batman and if I do that I will consider that appearance a huge success.

You do have a nice spread of comics on the table, though. Hope to see you at a convention soon.