Seems that I'm starting a lot of things this week, while wrapping up projects that have been in the works for some time.


- -- Started working on Cousin Harold 10 this week. This will be my first log for story since issue 5, set to run 32 pages. After issue 5, I switched to doing shorter stories. I think the longest story I have done since issue 5 was 12 pages. Incidentally this issue features a story about the night before the Air Ball 100 that happens the year after the Air Ball 100 story from issue 5. 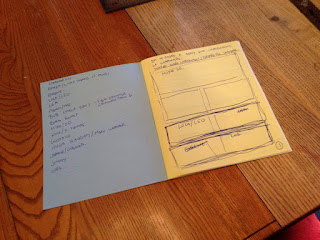 The plot has some elements that have been kicking around in my head since the mid 90’s. At one point I thought I was going to write the Doom Patrol, so I planned a story arc. I was young and thought I was a genius and that I would be given a chance to write that series with no experience, a little crazy, I know! Some of the elements from that story arc will be major plot points in this story.
I plan on trying to squeeze all of the Cousin Harold Universe characters into this story. So if you like a particular character he/she should be showing up for a couple of pages in this massive story.

- -- On the toy front. Friday I started working on producing sale versions of the Cousin Harold toy (designed by Erik Erspamer). I’m hoping the mold works, it’s the first mold I’m making without any help and there will be some difficulties with Harold’s ears. I expect to have some toys made by next weekend, so hopefully I will have some more pictures to share. 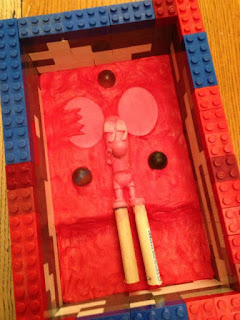 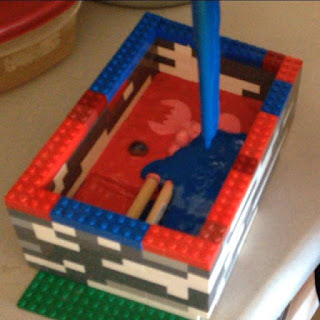 Trying to also finalize the sculpt for the Space Mummy toy. I think I have it, as long as I don’t break the Milliput again. Hoping to get this toy into production soon also. On a side note, I have wrapped up the first 2 pages of the first Space Mummy story and hope to be posting them in February as a teaser. I have some ideas on how I want to leak them, but I’m not sure if it’s going to work.

- -- This weekend I will be folding, stapling and trimming a Highbrow mini that made up of pages that I drew almost 20 years ago. Highbrow was one of my first characters and these pages have sort of haunted me for a long time. I felt like I needed to do something with them. I got an okay 8 pages story out of them and feel satisfied. Only like 35 copies of the books are being made and shipped to my Kickstarter backers. I’m glad I got this done finally. 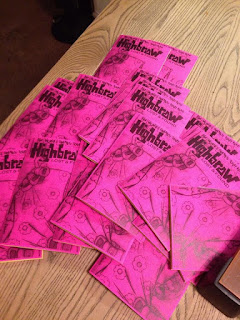 - -- The Comic Shout Out of the week goes to Copra #25 by Michael Fiffe. If you have not check out Copra you are missing one of the finest produced independent comics out there. Picture the 80’s suicide Squad book filled with Steve Ditko creations with a splash of Grant Morssion’s Doom Patrol. There are 3 trades available or you might be able to order some of the more recent issue from Fiffe himself. 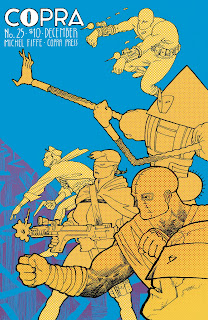