Thankfully I was thinking ahead (more on this later).

This update is like a week late for many reason, but the main one is when it rains in life, it pours. Things will get better.

- -- Last Sunday I was finalizing the newspaper and we were still 2 ads short, I was in talks with several people, but no one appears to be in the hurry that I’m in to get things done. So I decided I would pay for one of the spaces myself to advertise my new Kickstarter. However you cannot get the url from Kickstarter until you launch your Kickstarter. So I had to quickly put together my campaign and launch it to get the url. More about the Kickstarter later.

The other ad came in a day or 2 later and everything was falling into place. Publishing the Comics Never Stop newspaper is very stressful for me at certain time (around publication date). Too much of the project is waiting on other people to finish, whom as I said before do not seem to be in the same hurry that I am to get things done. With that said, I will be changing some of the things about the newspaper to make it easier for me to continue. Hopefully it will be for the better, but who knows. 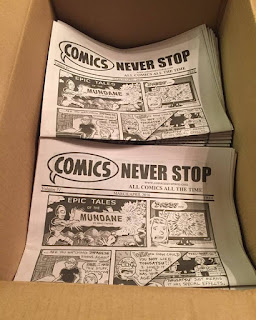 Update: Some great plans are in place for the future of the Comics Never Stop paper. I'm so excited about this. More information will be shared in the weeks ahead. Plus volume 4 arrived in the mail on Friday and it looks AWESOME!

- -- Spent my weekdays working on Cousin Harold 10. Starting a new long storyline (8 pages or more) always takes a little more time than being in the middle of that same storyline. I try to give each of the longer storylines it’s own unique look. I’m sure most people don’t notice the differences, but they are important to me. Things should start moving at a quicker pace in a few weeks. Good thing I planned ahead and decided to re-run a colorized version of an older Cousin Harold storyline. If I did not make this choice, I would not have posted any updates for the last week.

- -- Okay the Kickstarter. This year I wanted to keep it simple. So rather than coming up with a bunch of fancy reward levels. I just went with one, the subscription. That is what I’m interested in offering after all. I really enjoy sending out the subscription packs and Kickstarter seems to be the easiest way to distribute these subscription packs. The idea then hit me at the last minute (probably because my wife’s Oprah magazine arrive, which was a gift from her sister) that I should also offer a level for people to share my work with others. This prompt me to add a second reward level with two subscriptions available, one for you and one for a friend. 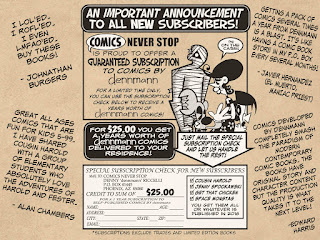 At this point the Kickstarter is 75% funded. If you can, your support would be appreciated.

- -- The main reason this post is late is my anniversary. I spent the weekend of the 5-7th out of town with my wonderful wife, Alys. Who I have been married to now for over 20 years (her joke). We decided to get out of town and get some rest. However that did not seem to be in the cards. My car decided it wanted to stop working right. So we rented a car for our little trip, but not knowing what was wrong with my own vehicle cause me a little anxiety during our trip and I really did not get to rest. (Found out later the clutch was going out and had to come up with a small pile of money to get that fixed). I did not want to spend money, which meant no hiking in Sedona because every place we wanted to go charged for entry. At least I got to spend the weekend with my beautiful wife. 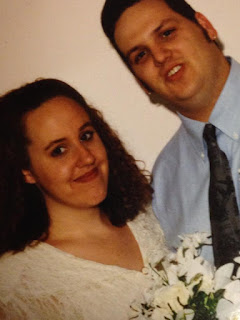 Oh and this past weekend I spent time selling my books at the Amazing Arizona Comic Con. 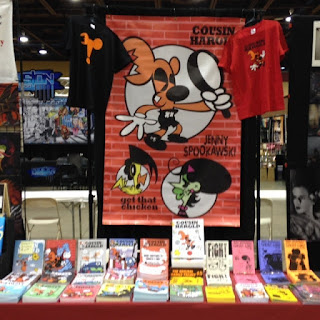 - -- Also my car had to go into the shop and have the clutch replaced. Never teach two teenagers back to back how to drive a manuel on the same clutch. It will do a lot of damage and cost a pretty penny to repair. Comic of the Week – Doctor Strange #5. I’m a mark for anything that Chris Bachalo does. As a bonus Jason Aaaron is crafting a very interesting story. If you have not tried this series, you should.

Sorry if I'm a little whiny this week. Thanks for reading.