It Would Have Been Cool

So some time ago I had the idea suggested to me to do a 24hour figure making day. Anyone that knows me, knows that I'm down for this type of challenge. I figured out the first day that I would be available to do this type of challenge, which was today - December 27th, 2016. So I set a side the day to make figures and ever came up with a good idea. I would make the figure as a surprise for one of the other creators in the community.

So I started this morning. 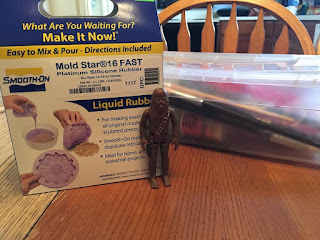 First the clay I needed to make the 2 part mold was frozen solid. This was an easy fix, I used a hair dryer to heat it up and had the clay ready in about 30 minutes. However when I poured the mold I forgot to put marks in the clay so that the 2 side of my 2 part mold would match up. (Should have started over at this point, but I pressed on.) I used the xacto knife to make some marks that I could use to line up the 2 parts later. (This seemed to work most of the time.) 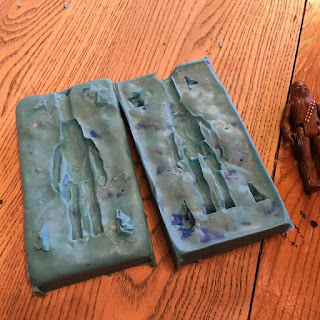 The 1st pull was lopsided due to the molds not matching up 100% (see I should have restarted). However my 2nd pull came out fine, so did my 3rd pull, but that was it. The 4th, 5th and 6th pulls all had some issue. Mostly with the hands. I was having problems getting the thumb on the left figure to fill. 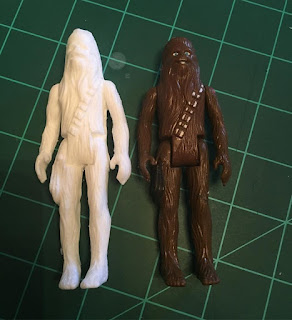 I tried shaking and tapping, all these tricks that people have shared with me, but I just could not get this stupid thumb to fill. (Pull 5 was also horribly misaligned.)

I planned the time, how long it should take to do everything in order to get it all done. At this point I'm a couple of hours behind and quite frustrated. I promised myself that if things were not working out. I could just walk away (which is something that is new to me). So that is what I'm doing, I'm throwing in the towel. I have too many other things to work on at this point to let this challenge continue to bring me down. 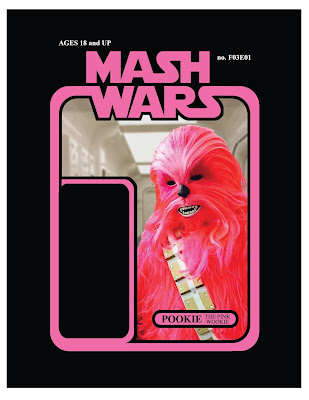 So who was the figure for? Gary Griggs! I love his Pink Chewbacca (which I will start calling Pookie). Gary is not a super close friend, but he is an all around nice dude and was there last year, when I was first learning to make figures from Eric Erspamer.

It would have been cool!

I haven't given up on making a figure for Gary. I have just thrown in the towel today. Hopefully I will find some time to try and make some of these figures again sometime soon.