First I would like to say Thank You to Jesse James Comics, Ash Avenue Comics, Samurai Comics and Drawn to Comics for letting take up space in their stores and sell my books without asking me for a dime. Arizona has some of the classist comic shops in the world. 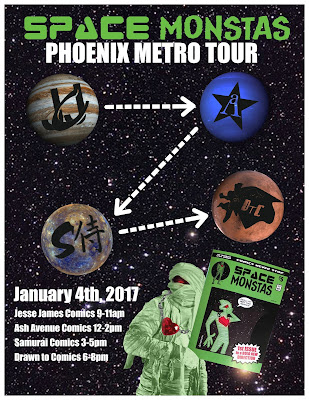 I came up with the idea of doing a little mini tour to celebrate the release of my Space Monstas comic last November. I had originally intended to release the comic at the Tucson Comic Con, but things just did not get done in time. The next convention is not until the end of February and I did not want to wait that long. I had also talked with some of the local comic store owners about how people only release their books around conventions and have really been forgetting that the stores have new releases every Wednesday.

A light bulb popped in my head, why not release the Space Monstas book on a Wednesday at a local store. Now which one? The answer was not which one, but how many would I be able to hit in one day.  Why go to multiple stores, because I have done in-store appearances and they tend to drag on. I felt if I was at a store for only a couple of hours, I would get a change of scenery when I needed it.

So I asked the 4 stores that I shop with the most if they were down with me setting up a small mini tour and stopping at each of their stores for 2 hours. All 4 were done and suggested some type of cross promotion (that is where the idea of the flyer came from.)

Next I needed to figure out what order I was going to visit the stores. For this I used Google to see when different stores had their peak times. I got to tell you, Google seemed to be right on. Each store had a steady flow of customers while I was there. The order was set and placed an hour between each appearance to help with travel time.

Now a little bit about sales. I sold about 4 books at each shop (plus 1 figure and 1 shirt) throughout the day. For each odd number of books that I sold I gave 1 book to the store to sell as a thank you for
the use of their space (if I sold 1 book, I gave 1 book to the store, if I sold 3 books, I gave 2 books to the store). This plan came together because my goal with my comics is not to make a ton of money, but get a ton of readers and I figured the books left at the stores would generate new readers (I will have to see how this works over the next few weeks as I stop at the store.) I moved a total of 27 books during the day (16 sold, 9 given to the stores and 2 sold wholesale). Money wise, I made over 170% of what it cost me to produce the books that I moved (this figure only includes printing costs).

One thing I should have picked up one earlier in the day was that at Jesse James Comics, Jesse had me put some books up by the register. Jesse's shop was the place that I sold the most books all day. This did not hit me until I was looking at numbers after I got home.

Another great thing about the day was the excitement from the people who were purchasing the book.
When I got home there we several Instagram posts about the days events.

So overall this was a good day and I plan on releasing future books in a similar fashion. Next Up: Cousin Harold #12 in April or May.