I had some choices to make this weekend.

The first being do I attended the Cactus-Con in Mesa or not. I was not able to purchase a table at the convention due to them being sold out when I attempted last September. So the only way I could attend the convention at this point was as a fan. I decided that if I was ahead on my weekly strip then I would attend on Sunday. However as I am typing this I still have not completed the week 4 strip (dialog still needs to be added.) As of yesterday morning, I only had work on the week 5 strip started, which would mean I had already lost my 4 week buffer that was in place when I started the strip. Not going to the con has given me the opportunity to complete the pencils for weeks 6 & 7, as well as ink and scan week 5. With all that needs to be accomplished and all that has been accomplished, I feel it was a good choice skip the con attendance as a fan. Hopefully I will be able to purchase a table for next years convention.

The second choice I had to make was to skip out on a family function. I told my wife that due to the schedule of the comic this year, I might have to miss a few birthday parties. Thankfully my wife understands and is willing to go to the parties with out me.

On a positive note, things are going great. I am very excited about my comic strip and enjoy watching the improvements I am making. I was able to complete issue #7 of the mini, which concludes the duck story, last Monday. I will be dropping the issue off around town next Saturday. Issue #7 is my first anniversary issue. 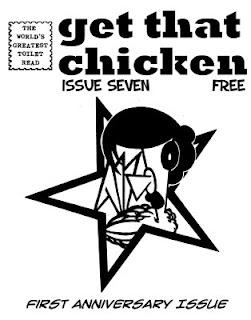