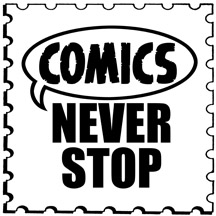 For a while I have wanted to start something that helped promote the non-mainstream comics that I enjoy, but are not featured on comics sites like Newsarama and Comic Book Resources. Although Robot 6 on CBR does a pretty good job of covering some of these books. There is also The Comics Journal site which features a little of what I'm thinking about. But as a whole, the books that I'm thinking of I find through Twitter, Tumblr and Facebook.

I did a mini-comic called Subtoon about 15 years ago that featured a long form interview with Greg McCann (creator of Cattle Brain). My goal was to imitate the Comics Journal interviews that I was reading, for a mini-comic I think I did a fairly good job. The book also featured comics reviews, Big Blue Couch Comix #1, Fishbone and  Reporter #1, just to name a few. The mini included a from the bargain bin article with a look a comics that I found in the discount section of my local shop, Anything Goes #1-6 were the books discussed.

A little over 2 years ago I was prepping to start writing some articles in the 'What Ever Happened To...' style. My first feature was going to be on Michael Macropoulos (creator of Supersonic Soul Puddin' and Spookgirl). But as I was gathering copies of his books from my collect to re-read and review in the article, Mike friended me on Facebook and I now knew what happened to him.

These two stories about are included to illustrate that doing comics news articles/review/promoting has been a part of my goal for a while. And I believe now I'm ready.

My goal is to create a site, probably starting with a blog, and write stories about the non-mainstream comics that I'm reading and enjoying (although I wouldn't be surprised if a little mainstream stuff is included. Off the top of my head I can see me writing some articles about Erik Larsen and his Savage Dragon book.)

Books like Diary Comics by Dustin Harbin, Scraps by Meredith McClaren and I Will Bite You by Joseph Lambert are the type that I intend to include on the site. I would also like to feature reviews of webcomics, interviews with creators and non-paid ads that include Kickstarters or other purchases that I might have made.

I currently create a webcomic & some mini-comics and I do not want this to get in the way of my own creative time. So I know I'm not going to be able to do this completely alone and would eventually like to include some others to help, I already have a few people in mind. I plan on starting out slow maybe doing a review or two a week myself, then adding some other people into the mix, with the goal of doing one update on the site each day of the week.

My intention is to launch on July 1st at www.comicsneverstop.com, which right now goes nowhere. Hopefully you will join me for the ride and maybe even join in on the discussions once the site is live.