Phoenix Comicon was Excellent to me again this year! 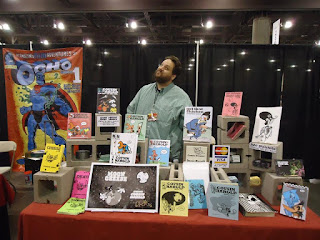 I probably had the heaviest set up of any creator at the con with my cinder blocks. I find that they made an awesome display. I would like to thank the convention organizers and all the fans for an awesome show. I had many people comment on how just a few years ago I only had the Get That Chicken book, and now look at them all. 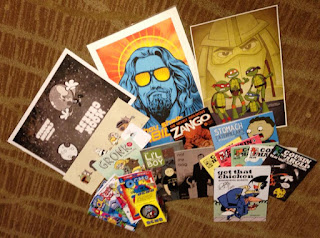 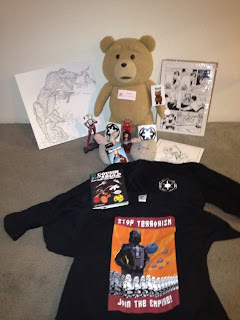 It was great to see people tweeting and post pictures on Facebook of their con swag and finding my books included in them. It is an honor and super humbling to be thought of as a special purchase for someone from the convention. 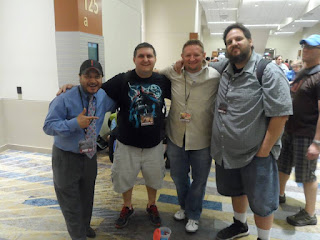 Hanging with some of Arizona's best just before the DIY Panel. Left to right Jesse James (Jesse James Comics), Ken Brown (Drawn to Comics), Eric Mengel (creator of Ocho) and myself, 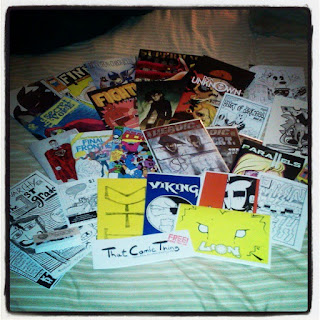 The con was great this year. I hear that just over 55,000 attended the show. This show reminded me of the San Diego Comic Con from about 10 years ago. It's just big enough to draw some big names and still small enough to see those big names, without having to wait in line from the crack of dawn. I even had the chance to meet a couple of my heroes. Mike and Laura Allred signed my 2 oversized Madman hard covers. I had the chance to chat with Tom Scioli about Angoulême and had him sign my copy of American Barbarian. Met Chris Pitzer of AdHouse. And picked up Supermag from Jim Rugg.

I also had the chance to meet a ton of fans and had quite a few people share their mini-comics with me (as can be seen in my con swag picture above). Thank you all for stopping by to chat and share your work with me.

The DIY Panel was packed again this year, the room attendant had to ask people to find seats. It was almost standing room only. Hard to believe that so many people are interest in what Eric Mengel and I have to say about making comics, but year after year this room in packed.

It was an awesome show to be a creator and an even awesomer show to be a fan!
Looking forward to next year.
-denny!