I don't even know where to begin with this year. I accomplished so much. I think it all started with my successful Kickstarter for a subscription to my 20145 books. With the first book being Cousin Harold 5. 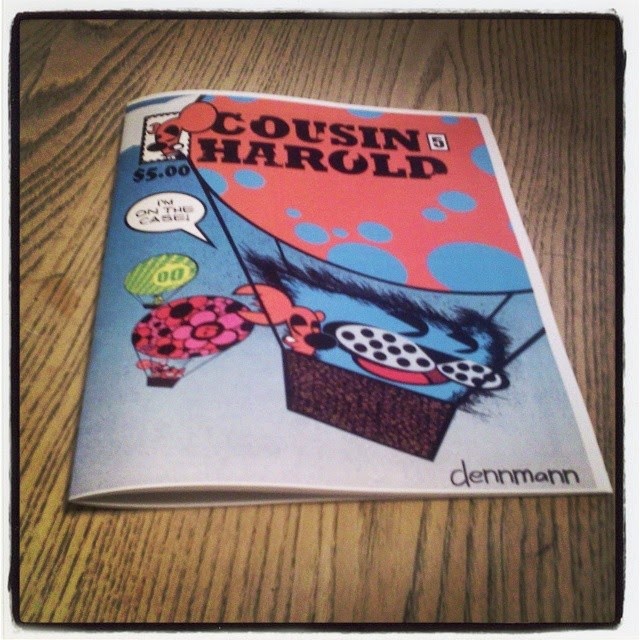 I'm so grateful to be surrounded with enough  support to pull this Kickstarter idea off. Basically because of the support I had enough money to print my books throughout the year no matter what happened. I don't know if I can ever thank those that backed my Kickstarter enough. So once again THANK YOU!

At about the same time a seed of an idea was planted in my head. What was to become the AZ Universe book. 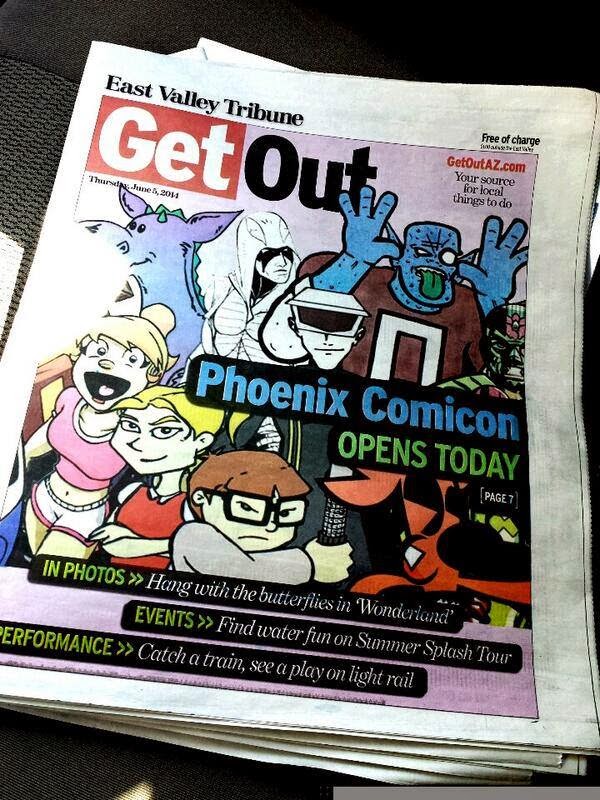 During the Amazing Arizona Con I was at Dinner with Eric and Russ and we talked about how cool it would be to have a book that showed off all of the Arizona based talent and their creations. With in a month I had the project together and sent to the printers. The book was released at the Phoenix Comicon and even made the front page of a local paper.

While that project was on my plate I had found out about a thing called Mini-Comic Day. The basic idea is that you would write, draw, produce and sell a mini-comic within a 24hour period. Much like 24hour Comic Day, but it turned out to be way more fun. 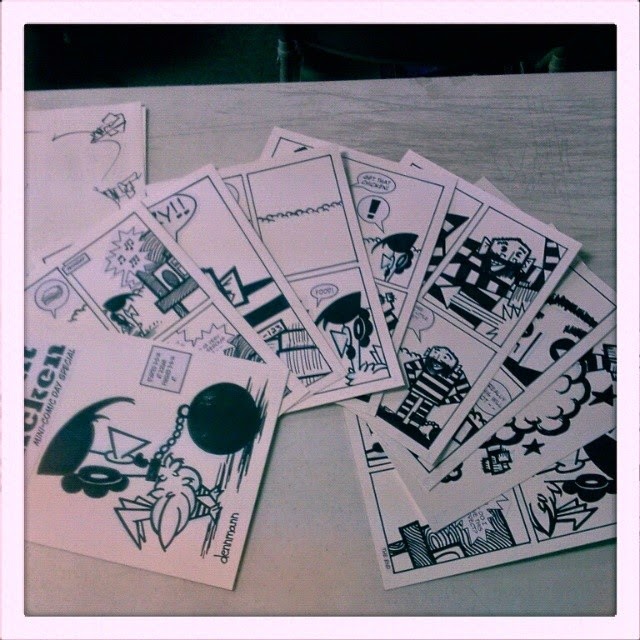 So I dusted off Get That Chicken and went about creating a little story in 24hours. Along with my pals Eric and Damon, we copied our books and made it down to an independent zine festival in downtown Phoenix to sell our freshly created books. Super proud of being able to do this and hope to do it again in 2015.

Quite often I come up with publishing challenges and that is how I go about creating some of my stories. This year was no different when I came up with the idea of printing part of my book on a photocopier and adding a color to it with my home printer. 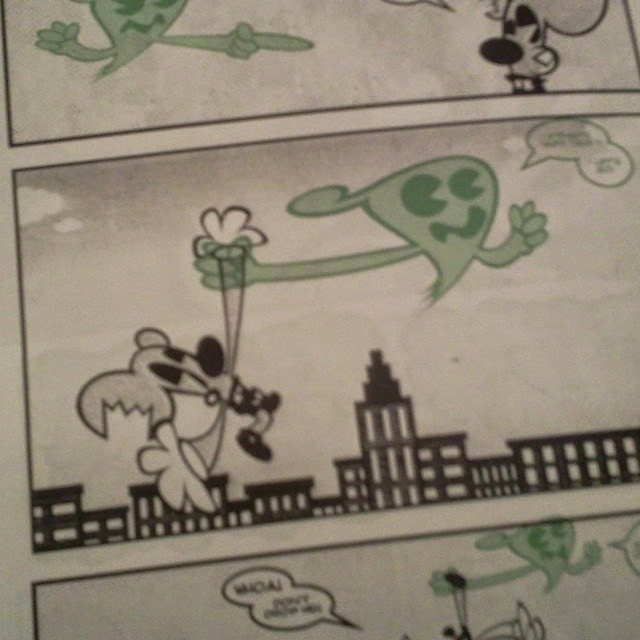 Ghost Cheese was born of this frankenstein melding of the 2 printing processes. I wasn't sure if the idea was going to work, so I only print about 50 copies of the book and it quickly sold out. The story is planned to be reprinted this year in the Cousin Harold King-Size Mini-Comic. One of my greatest pleasure of the year was showing this book to other creators and telling them how I made it and then watching their brains skip a beat for a second. I hope to use this process more in the near future.

When the year go tough and I felt like everything everywhere was kicking me down, I remembered that a bunch of people had supported me earlier in the year and were waiting on their subscriptions. I was always happy to tell the postal clerks that these were comics going to my subscribers. 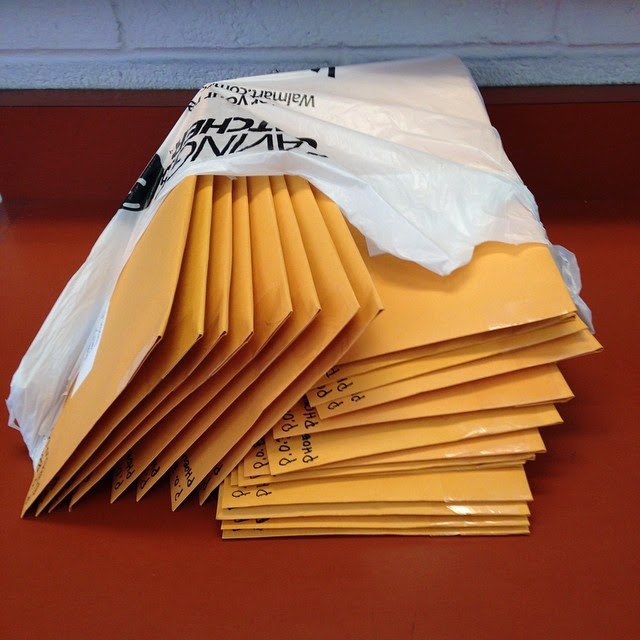 Seriously you all do not know how much your support meant to me this year. Once again Thank You to all of my Kickstarter Backers!

The first AZ Universe book did so well that we created a second one and released it at the Tucson Comic-Con. 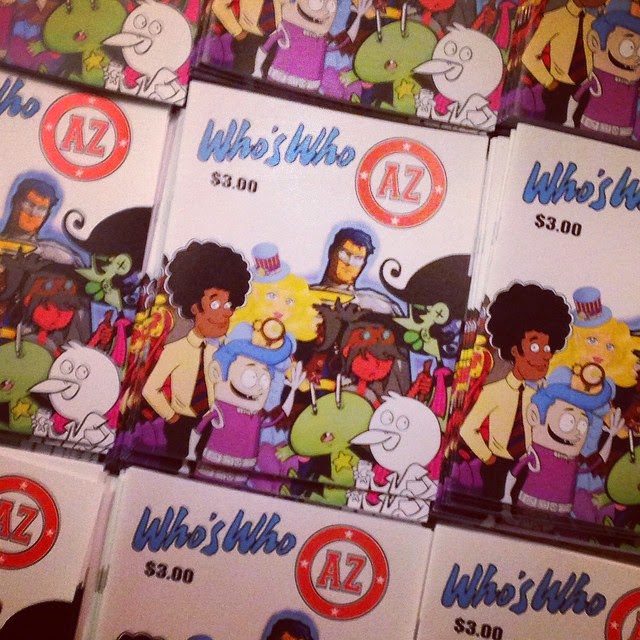 Each of the Arizona Handbooks features 17 creations from Arizona creators. (Volume 3 is in the works as I type this.) I'm so glad to be a part of such a talented and caring comics community. From the local shops to the people who buy our books, everyone is so AWESOME!

The year wrapped up roughly where it started. I finished up my Kickstarter rewards. Each subscription backer received 3 packages throughout the year (a total of 8 books). 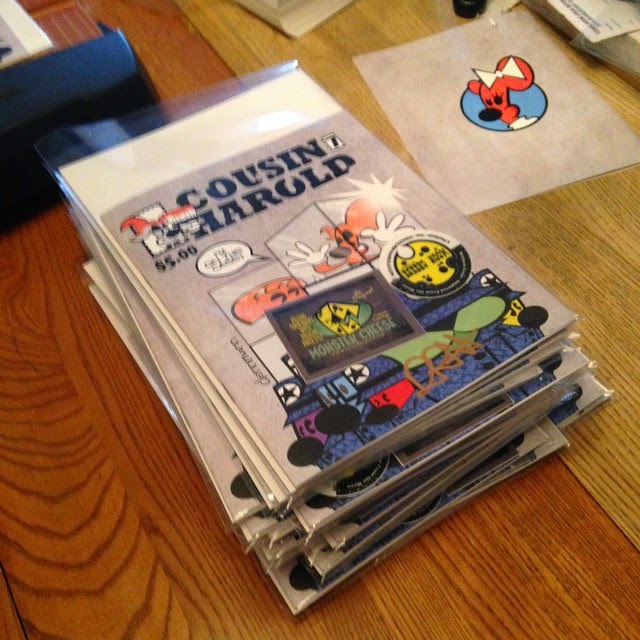 And I began planning my Kickstarter Subscription drive for 2015.

Again Thank You all for your support in 2014 and I look forward to making a ton more books in 2015.

(I feel like this was kind long and only said about half the stuff I wanted to say, but the most important thing is - Thank You!)
Posted by dennmann at 4:13 PM

It's nice looking back and seeing everything that was accomplished in the past year, isn't it?

I'm sure you'll keep that momentum going for 2015, Denny!

Yeah, Javier - starting off good. Looking forward to making a bunch of comics this year and finishing some that were started long ago.

Ps. I'm horrible at keep up with who post comments on my own website. Sorry this was such a late response.