Out west here on the southwest side of Peoria, AZ things have started to heat up already this year. Temperatures in 80's hit for most of last week. We expect the temps to go back down, but this winter has been relatively mild. Good thing too, because I'm busy making figures, comics, cards and other things.

- -- First up; My Space Monstas figure was reviewed by the Sucklord.

Really wish he would have read the comic first. I think he set up the package breaking. I had to open 8 figures to re-card them because of some issues with the cards. To break them open (without peeling them) we really had to swing them about pretty hard. I have changed glues however because I am aware of at least one other package coming open. As for the "f*ck You" attitude that he wanted to see. I might be the only bootleg figure maker that does not come from that school. I treat my work as a serious art form.

I appreciate the positive comments about the trading cards (should have the set done for Phoenix Comicon). I also appreciate him noticing how realized the project is. I have spent a many hours planning out Space Mopnstas and this is proof that those hours were well worth it. Kind of sad to see the Sucklord closing up shop on his part of the bootleg figure business, but I guess that opens more space for me.

- -- I really have been busy doing things but nothing is at a stage where I can show you. I'm about halfway through Cousin Harold 12. I expect to release this book in May maybe April. I have been planning out some figures, but that got put on hold to complete a secret commission project for the AZ Eventure Con.

- -- Speaking of the AZ Eventure Con. I will be there Saturday with the new Cousin Harold comic, the first Space Monstas comic and the new Jenny Spookawski mini-comic. Plus figures, t-shirts and the AZ Eventure Con will be selling a secret project that I created for them. Should be a super fun time. Tickets have to be purchased before arriving at the show, there will be no tickets sold at the door (at least that is what I have been told) and tickets are limited. 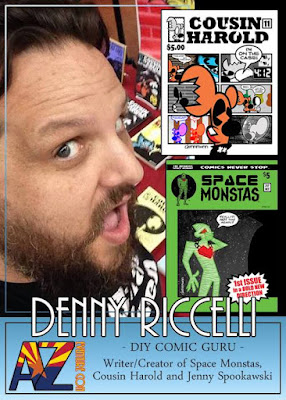 - -- Also available at the show in the goodie (swag) bags the latest edition of the Comics Never Stop newspaper. Yess it is back and better than ever. Don't fall for the imitation, get the original comic newspaper. 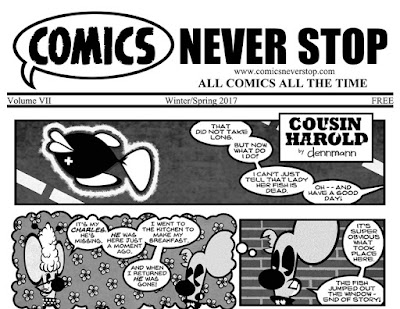 I will also be handing them out at the March First Friday event.

Well that is about all for this newsletter. I'm going to try and get back to weekly (or bi-weekly) after the convention. I really have a lot of things planned for this year and would like to use the newsletter to keep my on track.

Thanx for your support,