Out here on the south side of Peoria, it is still HOT! And I'm always grinding, although there might not be much to talk about each week. 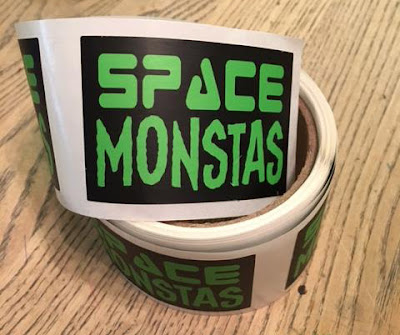 - -- I print my stickers through Sticker Mule and they send out a lot of special offers on what seems to be a weekly basis. I thought that I would start taking advantage of these offers and print up stickers. This was the first one. 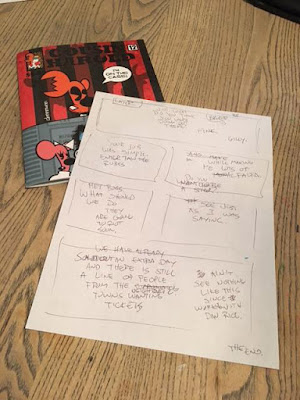 - -- Yesterday I wrote the final page of Cousin Harold 13, which is the 2nd part of the circus storyline. Very excited with how this story is filling out. Last year the story was just an idea and now I'm over halfway through making it. When people ask me how you make comics. I tell them one page a week, which is still the grind I'm on. The one page a week method, lets me work on other projects. Planning on a Kickstarter to help distribute this book in late September, early October. 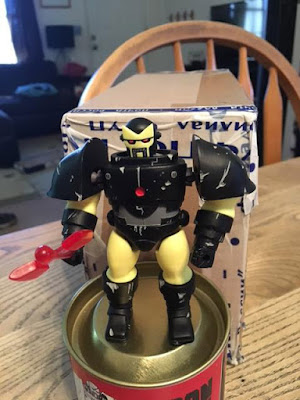 - -- The figure above, is something that I recently purchased. The Iron Goth (Night) by Kosrobot. I ordered this figure for a couple of reasons. The first is because it was a little different than the 3.75 figures that I usually purchase and I wanted to see how it was made. The second is a little more serious. As a kid I grew up being told that America was the country where you can do anything you want because of freedom and in other countries things were not the same. As I became an adult I have found out that this was not true, that people in other countries have the freedom to do the same things that I have the freedom to do. In this case, Kosrobot (who lives in Russia) gets to make bootleg figures and sell them to people around the world (the same as I do, living in the United States). I would then assume that his life is very similar to mine and not a horrible prison that I have been led to believe. I'm not sure why this bothers me so much, but I feel like I have been lied to by adults and society regularly throughout my life.

- -- On the super down low, Shawn Demumbrum and I have been recording a podcast where we talk about the comics we have recently purchased/read. This really is just us feeling things out. I feel like the show is a person getting to be a fly on the wall, listening to two guys talk about comics. Both Shawn and I are well read. I purchase comics from around the world (even if I cannot read them). My friends joke that if aliens arrived on the earth the first question I would ask them is "Do you have any comics?" I'm not sure where we are going and what our goals are, but I'm having fun.

Thanx for reading this week.