After picking out the pieces that I plan to use and glueing them together it's time to make the molds. Or at least prep them.

I had originally started doing a two part mold, but I was never happy with them. I then learned to do a cut mold using empty toilet paper tubes. This worked okay but I had a hard time making sure that the figures stood after glueing the legs on. 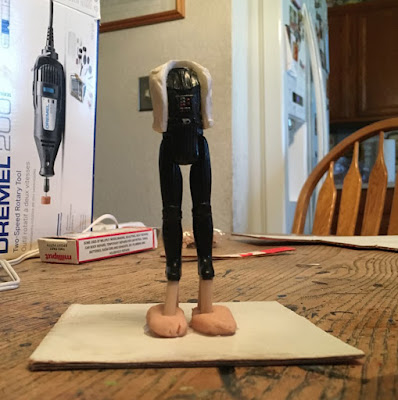 Recently I started making cut molds for the body with the legs attached (sometimes the head is attached also). The empty toilet paper tube was too small though. Enter the empty Pringles can (with some cardboard tape to it (the photo is towards the end of this blog).

I have two places to fill on each foot. One in the front and one in the back. I was having problems with bubble holes and this was my solution. I use some clay glued to the a piece of cardboard and hot glue the Pringles can to the cardboard. 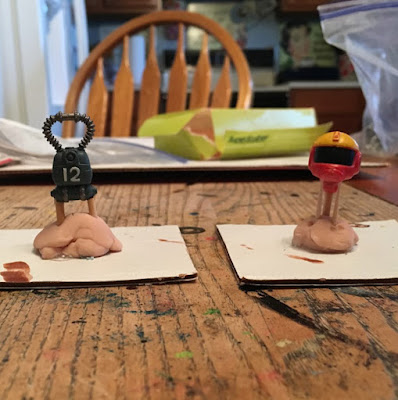 For the head and the accessories I prep them similar to the body but the will be encased in a empty toilet paper tube that has been covered with duct tape so that the silicone mold will not stick to it. My last couple of head have had some undercuts, so to avoid bubble holes I have run a couple of toothpicks to the head to allow the air to escape when casting. 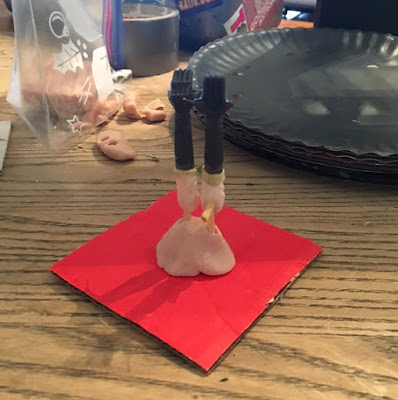 Finally the arms. I have been molding my arms in the same mold for a while now. There has only been one issue with this, that was when the figures had 2 different types of arms. Another thing I started doing lately is adding pins to the fingertips to help them fill, this has worked so far, but I have not done a human hand since I switched to this method.

Next will be pouring the molds (which I'm in the middle of doing as I finish typing this).