I have wanted to share the process I go through when making my bootleg figures. However each time I look through my pictures I'm missing some major steps. So I decided to document the figure that I'm currently working on as I make it. Not sure how long this process takes or if I will speed it up because I am doing these post, but here it goes.

The first thing is coming up with an idea. I really wanted to make a 3rd figure to go with what appears to be my space biker figures. Which started with Insecticus (below) 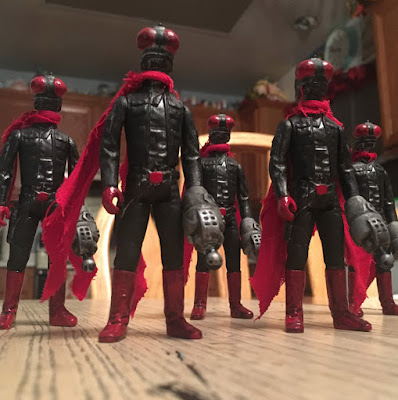 and continued with my current release Derro Nimbus (below) 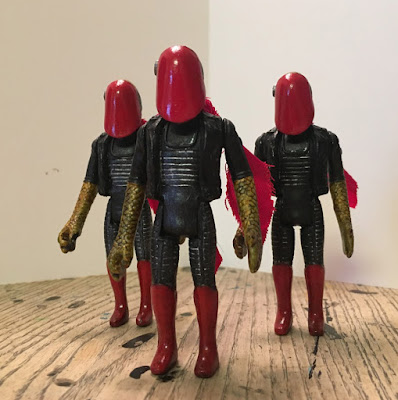 I originally had a different third figure planned but I really liked the way the leather jack worked out on this figure and wanted to immediately use it on another figure. So the figure I was working on had to be shelved for now. 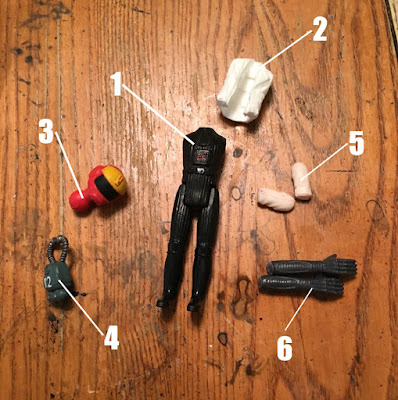 I usually start my figures with a body, but in this case I needed a body to put the leather jacket on. I wanted something the had groves or divites in it similar to the Greedo body that I used for Nimbus.

1) The Darth Vader body was perfect for this. This body even had legs that matched, which also had boots similar to the Greedo boots.

2) A resin cast of the Terminator Leather jacket all hollowed out. In addition to hollowing out this piece to put this jack on the figures, I have had to shave a little off the figures sides.

3) The head came from an Adventure People Fighter Pilot. Unlike the other 2 figures who have Star Wars figure heads that have been turned backwards and modified. I had found this piece after discovering piece #4 and it was a perfect fit.

4) This piece came from a figure I picked up at Dollar General. For whatever reason I like using Star Wars figure bodies, but I want them to be edited a bit. When I chose to use the Darth Vader body, I knew I would have to modify his chest plate somehow. This is a diving mask and needed to attach to some type of face mask. The head from the Fighter Pilot seems to work perfectly.

5) the arms were a little bit of an issue at first. Vader's body is long and needs longer arms. I also wanted something that was non human. Originally I was going to use Admiral Akbar's arms, but they were not long enough. So I just used his up arm pieces.

6) And the forearms from the Alien figure to complete things. 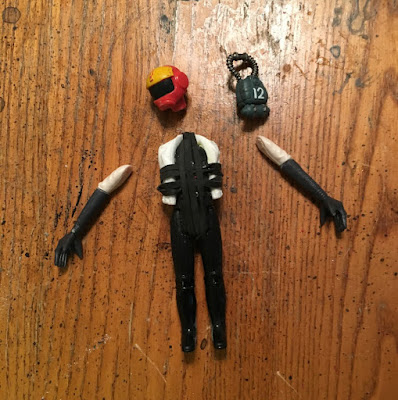 The above picture is so that you will get some idea of what it will look like put together. The body has some rubber bands wrapped around it to keep the leather jacket in place while the glue and Milliput dries.

This figure is going to be SWEET!

More updates soon as I move forward with this figure.
Posted by dennmann at 12:43 PM