As I stopped by the shops where I dropped of the book last week, I noticed that the issues with the officers and chicken on the cover are picked up quicker than the issues with the ducks on the cover. It appears that people like the officers and chicken more than the ducks. I have had a rough time working on the duck stories, but I think this is due to the amount of ducks ?I decided to include. When I start the online strip in 2009 I plan on using the ducks in smaller groups. Hopefully this change will help make the ducks a little more interesting to fans as well as myself.

Speaking of the online strip, it starts the first Sunday of 2009 and will continue every Sunday during the year. Below is the ad for the strip from the back cover of issue #6. 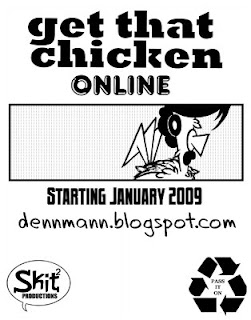