Out here on the west side of town, things have picked up. Comics, toys and trading cards are being made. Each project is in it's own place and on track to be finished on time. I think doing multiple projects helps me keep excited for each one. If I was working on one thing, I think I would get bored and need to take a break way too often. 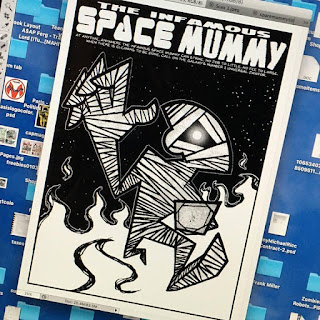 - -- The Space Monstas comic is coming along nicely. This is the splash/title page from the second story of the issue. I plan on having this done in mid october and hopefully available at the Tucson Comic Con. I will also be running a Space Monstas Kickstarter once the comic is done. The Kickstarter will include comics, resin figures, trading cards and t-shirts.

- -- Speaking of resin figures, work on the Vinny Vampire figure has started. Here is the first attempt a his head sculpt. I sanded it down this morning and moved it to his actual body. I think it looks really good. Will be making a mold in the next couple of weeks. This figure will be limited to 13. Besides the original Space Mummy figure all the other Space Monstas figures will be limited to 13. (Oh and there is the Vinny Vampire trading card. 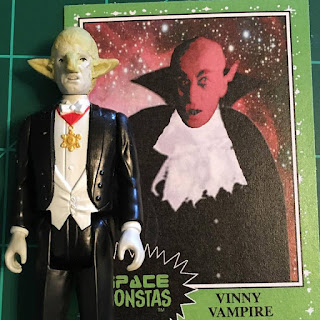 - -- Speaking of trading cards, just received my wax pack wrappers from Sidekick Labs this week. Tom did an AWESOME job on these. Now I have to get creating the other 6 cards for this set. I have the layouts done. The trading cards should be done in time for the Tucson Comic Con. 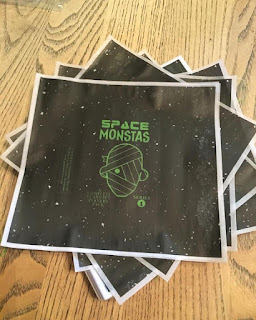 - -- Also hard at work on new Cousin Harold material. I'm drawing about 4 strips a week at this point and have a buffer until the end of October at this point. Cousin Harold 11 is 3 pages from being completed and will be published on time this November/December. 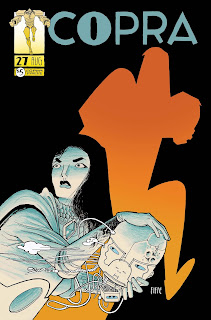 - -- Comic of the Week Copra 27! Seriously if you have not tried this series yet, you are missing out. This was the best issue yet (maybe that is because of his rift on the Doom Patrol that is include). Below are the first 3 pages.

Until next time - Take Care,